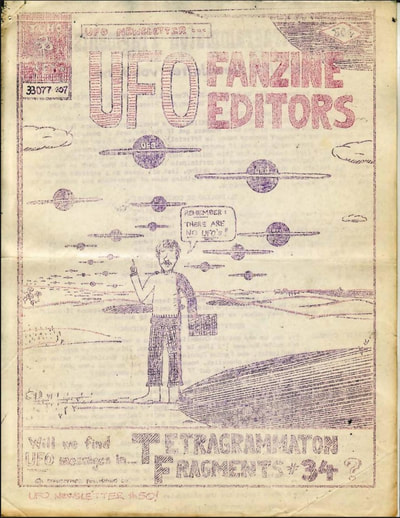 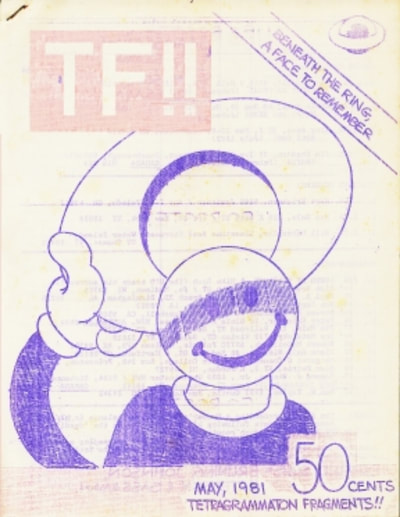 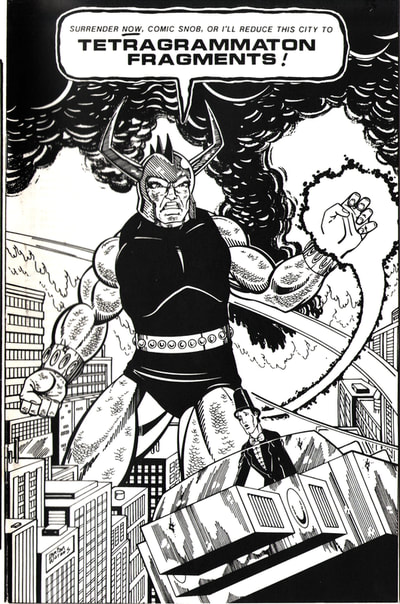 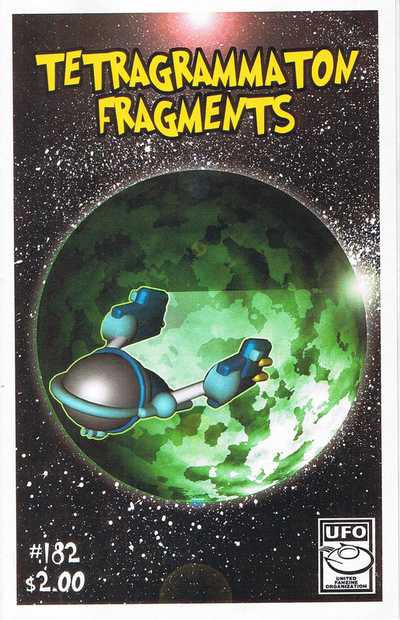 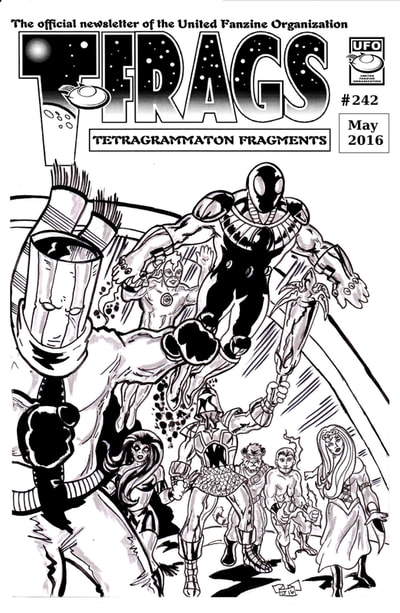 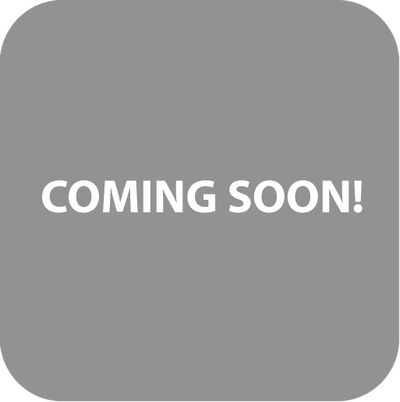 The UFO has its origins in the BPP (Blue Plaque Publications), which began with the BPP symbol on the cover of the first issue of Carl Gafford's fanzine Minotaur in November 1968.  By 1970, the BPP became a co-op of small-press publishers who put the BPP symbol and checklist on their publications.  Carl Gafford was Chairman of the group and published six issues of a BPP newsletter.  The group dissolved in 1972 but was revived the following year by Steve Keeter, who had been voted into the BPP shortly before it disbanded.  Steve had renumbered the BPP newsletter with a Volume Two, which began the tradition of a new Volume denoting the tenure of a new Chairman. (This practice was eventually dropped, as can be seen in the index.)  In 1974, the BPP was renamed the UFO, and in 1975 the UFO Newsletter was given the title Tetragrammaton Fragments! (called T-Frags, Tet Frags, or simply TF for short), although with the exclamation point(s) at the end of the phrase often ignored.  After mid-1981, the UFO quietly disbanded, but was revived in November 1984 by former member Jim Main.  The newsletter had been printed full-size on 8.5" x 11" paper (stapled on the left side or upper corner), but has been published digest-size (5.5" x 8.5") since TF #87 (March 1985).  Unfortunately, many issues don't have a publication date listed, and in those cases I've used my best judgement to assign a date based on internal evidence, or affixed a question mark when in doubt about the date of publication.
​
Click the cover images for each entry in the index to view the covers full-size. Cover scans and issue descriptions for #85-134, 136, 138-147, 149, 150 & 152 were made by me from my own copies.  The majority of the other cover images were provided by Steve Keeter.  Descriptions of pre-1978 issues were taken from Steve Keeter's UFO History Corner columns (for member lists and issue summaries) and info provided by Steven Kristiansen (for page counts and cover credits for #22-50).  Michael R. Neno provided cover scans/page counts of #151, 153-155.  My thanks to them in helping make this checklist possible.  Please note that some of the issues do not have a cover image available at this time.  If you have any of those missing issues and are willing to scan the front cover for me, I'd be happy to add it to this index.  You can email me  at robimes@yahoo.com

I have grouped the issues onto pages that show 50 issues at a time, to make it easier to scroll through them.  Thus, #1-50 are on one page, #51-100 on the next page, #101-150 on another page, and so on.  Links to go to the next page (or previous page) are provided at the top of each page.  At some point I may add an additional page to list related UFO zines such as the UFO Annuals, catalogs, parody issues, newsletters (like UFO Newsbrief) published in between issues of TF, etc.  I have also added a page about the revived BPP (which began in 1999 and disbanded in 2009) that indexes its newsletters. (That BPP group was not related to the UFO, but derived its name from the earlier BPP co-op from which the UFO evolved.)

A note on terms used in this index.  Someone who applies to join the group is called an applicant; someone who is merely proposed for membership is "on speculation" (or "on spec" for short).  A "memberlist" is a roster of the group's members; a "memberzine" is a zine published by a member that carries the group symbol and checklist (which lists other memberzines that are available).  "Failure to write" means that a member was dropped from the group for not writing a column for the group's newsletter (sometimes called NL for short).  An "illo" mean an illustration (an artist's drawing).  Gafiation/gafiate means that the person has drifted out of fandom and is no longer involved in publishing and/or communicating.  An "Emergency Chairman" is a member designated to become Chairman in the event that the elected Chairman is no longer able or willing to fulfill his duties. The "Constitution" is the agreed-upon set of rules governing the group, which can be amended by a vote of the members.
​
-- Rob Imes, former UFO Chairman (2012-2018)